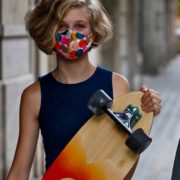 So, based on this being a blog post about living in Spain, it is now safe to assume that I live in Spain. The day we moved was the day that most people were starting up school so people were posting on Instagram about how they went to school or whatever and my thought was, that’s cool too but I moved to Spain today (not that it’s a competition or anything). Here are some small stories that have happened since we’ve moved.

Last Christmas I got three tiny cactuses, and by tiny I mean none of them were bigger than my thumb. Anyway, when you travel internationally you are not allowed to bring over any living things in your luggage. Since the cactuses were so small, I just put them in an empty retainer case in the middle of my suitcase with the hope they would not be destroyed. They made it to the apartment completely fine but I forgot to open them for a while so one of the cactuses is now almost dead(oops).

They say that, at most, only 891 have made it to the summit of Everest in one year so we had reason to be afraid. As we approached we could barely see the top through the glaring sun, but we knew we had to keep going. The first day we made it three levels, it was amazing how different the landscape was and how it reached further than the eye could see. A few days later, we passed through three and on to four, five, and six. By then, you could tell that the air was getting thinner as you wound through the pathways up, up, up. Every level provided some reward that you were not expecting to see. Another day went by and we reached the eighth stage but we couldn’t go any further, it was too much to tackle. Finally the day came where we again reached the eighth stage but this time, we were prepared to press on. There was no turning back as we stepped on the escalator and up to the 9th floor of El Corte Ingles. Awaiting us were treasures beyond imaginable, the cafeteria. It was filled with pastas and sandwiches and burgers and churros, oh the churros so covered in sugar and with a side of chocolate for dipping. At this point it was confirmed that everything we had gone through was worth it and that there were no regrets about what we ordered.

The other weekend we went to the French Riviera. We were visiting a couple of cities and one of them (we didn’t know this until after we had already picked to go there) was my Grandma’s favorite town. The town is called Eze and it is a little medieval  town with small winding streets going up and down with beautiful vistas hidden in gaps between buildings. The day we were there the Tour de France was passing through so we went and saw that, as you do. Before the bikes came through a parade with cars came through that threw random merchandise into the crowd such as random smallish and long paper banners that were for some a random car company that was in no way related to the Tour de France. We waited for the bikes to come for a while but when they did, they came in waves. That was pretty awesome except the kid in front of me when the bikes were passing by was waving his arms around making it impossible to take a clear picture. He also had one of those banners that were given out and he was waving it up and down in a circle which made it nearly impossible to take a picture let alone see. Enough about that, the next day we came back to Eze for a perfume experience. We went to a workshop and my mom and I created our own perfumes. Cameron helped my mom and my dad helped me but he claims that all the scents smelled good which wasn’t helpful but did make me feel good about my choices. After 2 ½ hours of perfume mixing our scents were ready for us to take home in a fancy bottle. They then had to ferment (I know that’s not the correct word but it is relatively funny when referring to a good smelling perfume) for two weeks. The car ride back was an absolute nightmare because everyone but me decided to try on the already crafted perfumes and cologne in the store which made the car a collage of those scents along with the ones we had been intentionally smelling for hours. That being said, we all smell very delightful now.

The More the Merrier the More We Rice

One night when we were in France we were trying to find a place to eat. Since none of us speak French we used the google translate app where you can hold up the camera up some words (like a road sign or menu) and it switches what it says to English. Anyway, we held up the app on my phone to the image of the menu on my mom’s phone and it translated. The translation was very off with the craziest menu item called “the more the merrier the more we rice.” We decided to turn the translated menu items into a poem, please read the picture and try and read it as a poem.

Want to join the discussion?
Feel free to contribute!

Guess what I just found!
Scroll to top